Inspired by seeing a spider hanging from outside our kitchen window, I developed this into a comic book style.  A three colour print. 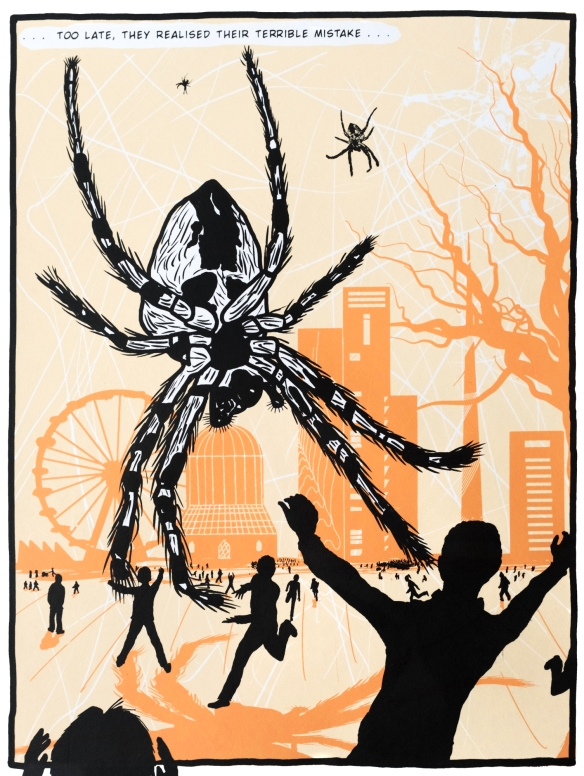 Ann and I will be exhibiting from home during Bucks Art Weeks during June.  I will be showing and demonstrating new screen prints.

So, after a long absence from posting, I am returning to document my forays into screen printing – great fun.  The only screen printing I have done before was almost half a century ago at university and that was posters with noxious inks on the floor of the Union building. Now I have discovered there are actually better ways of doing it!

Here are some of my first six months efforts. 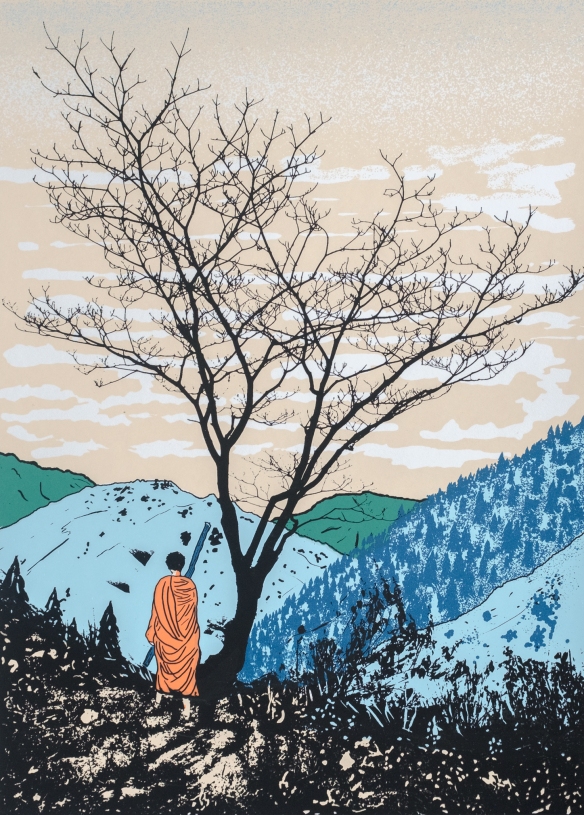 This is based on a photograph I took in Nepal. The tree and foreground are silhouetted from the photo, the rest is imagined.  I tried to match the colours loosely to those of traditional Japanese wood prints.  I’m really amazed at the detail possible from the humble screen print. I used photo emulsion to make the stencil.

Next is a recent picture of a Chocolatier in Bruges. 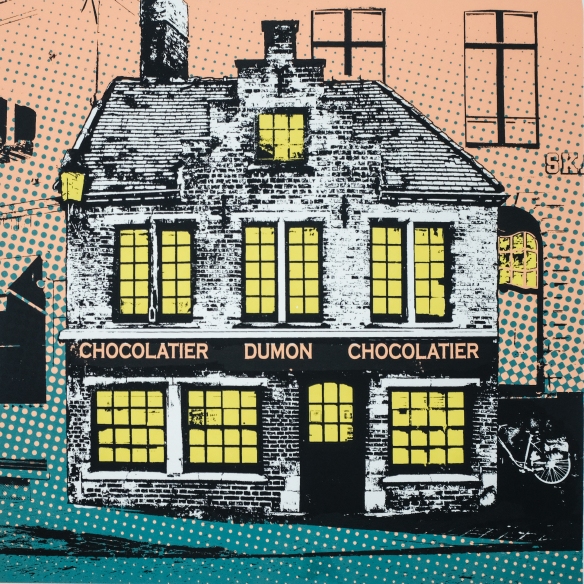 We recently renovated our living room.  Here is my iPad drawing of it (part of it!).  I used MediBang Paint again.  I just find Paintstorm Pro too fiddly. I am in the middle of another longer term project using a file created on the iMac in Affinity Design. It has ended up with close to 300 layers mainly as a result of the way the software assigns a layer to each action.  It is also 5000 px x 7000 px.  MediBang is the only iPad software that will load the resulting huge psd file.  Paintstorm and Procreate couldn’t cope. 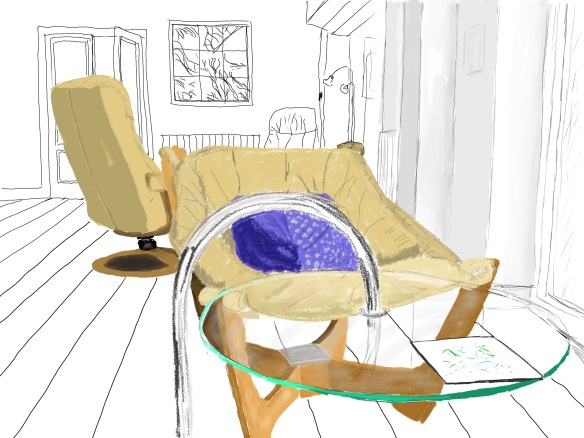 I have been trying to improve my drawing (and painting) skills recently and decided to use an iPad Pro to assist.  Not that it is the real thing and I still use physical materials too. It has meant that I get more practice in especially with sketching. Using layers and deleting has allowed me to be more analytical as I try to improve.

There are some good pieces of software around either cheap or even free. The three I have spent a little time with are Paintstorm Studio, Procreate and the strangely named Medibang Paint.  They each have their own band of enthusiasts.   I want to use Paintstorm Studio because it has a unique approach to brushes and blending/mixing paints.  It is a clever piece of software with a huge amount of control for the user.  I find that it is a little unreliable and crashes from time to time – not really a problem because it does automatic backups frequently.  The interface is muddling though and there are some irritations.   With further development it has the potential to be the best of the lot.  Procreate has a beautiful clean interface and is easy to use.  Not so good on blending.  Its modus operandi is to attach a texture to each brush – good for instant gratification but I really prefer to keep the brush separate from the texture in digital art.

To my surprise the one I am liking best at the moment is Medibang.  It is free and is available for all formats PC, Mac, tablets and has a really comprehensive set of tools.  It is  a Japanese programme but available in English.  It’s main user base and also its target group is Japanese youngsters making Manga art.  The tools though allow more traditional drawing and ‘painting’ and it has some very nice features.  Better than most freeware it has a nice interface although it can be a bit clunky until you get used to it.  Worth persevering with – sign up to the site (in Japanese!) and then you can download loads of new brushes. 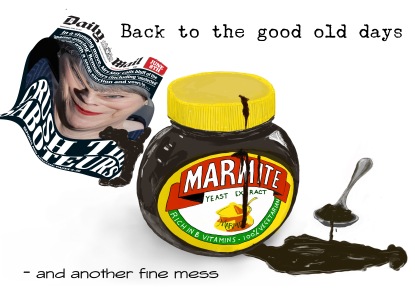 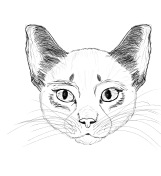 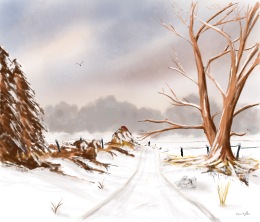 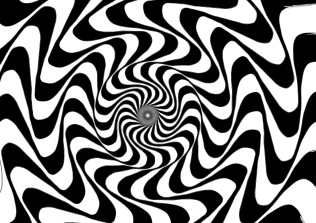 Obsidian Art will be showing work at the Affordable Art Fair in Bristol this year and I am fortunate to one of seven artists selected for the stand.  My work has been vetted and thankfully accepted by the Affordable Art Fair selection process.  More details later – let me know if you would like an invite to the Private View (of the whole exhibition) on the evening of 8th September. 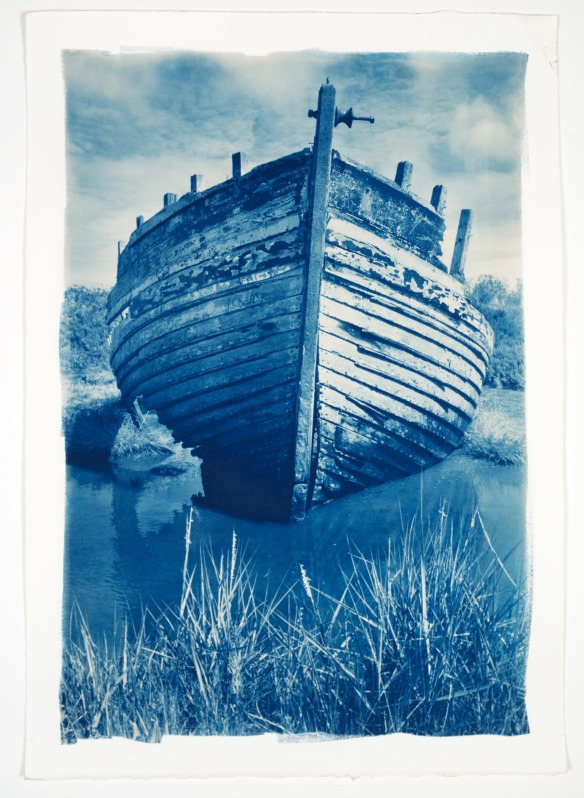 I am delighted to be showing some of my work alongside other artists in the fabulous wall space available at the new upmarket coffee shop in Beaconsfield opposite Waitrose.  Originally I had three framed works but one of these, Allium, has sold and there are now two additional works alongside the other two.  Thanks to Jenny Roberts and Smith and Kittle for organising the exhibition. 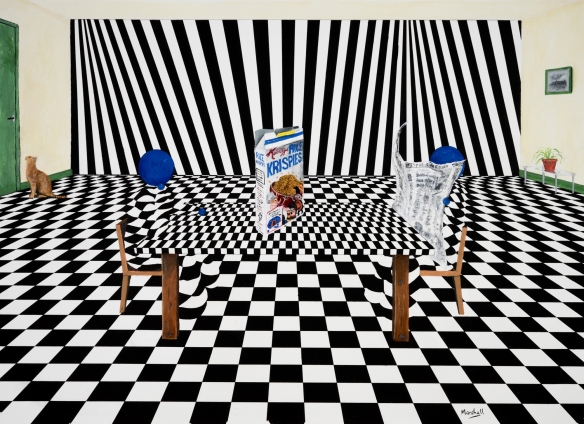 My latest painting is at last complete.  It has taken ages.   Based on another idea I had over forty years ago but this time I have completely started from scratch.  It is in acrylics and acrylic ink on sized cotton rag paper.  It works well for what I want especially in drawing fine lines with pen but I think I will try additional sizing next time to make it less porous. 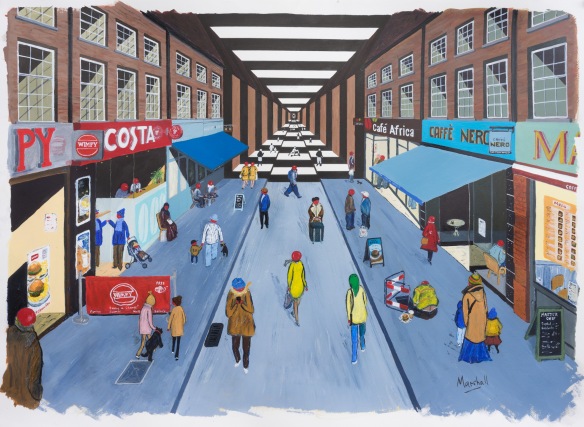 Entries for this year’s BOS will be closing at the end of January.

As well as my alternative process and darkroom prints, this year I hope to show some more pinhole camera pictures, hand tinted photos and also my renewed steps into painting.    Here is my  image for this year’s directory.  It is titled “‘Britain Faces Influx ……’, Breakfast, 1972”.  The story behind it is a bit involved but in essence I spent a few happy months exploring painting during 1972 whilst waiting to start a new job.  It ended up with the first version of this picture which disappeared years ago.  Fortunately I had kept a copy on slide film which had nevertheless deteriorated rather badly (it was mounted in glass and went mouldy).  This new version which I have only  just completed in acrylic is expanded from the original.  I was going to update it to make a contemporary picture (mobile phones etc) but realised that the 1972 newspaper headline ‘Britain Faces Influx of 80000 Asians’ held a certain current relevance of the plus ca change type.  Also if the truth be known I liked the nostalgia of the old rice krispies packet not to mention the retro styling of The Guardian.  The whole thing came about as I was exploring Op art and Vasarely and was looking for something to do with it.  Now I am looking for a Vietnamese Boat people headline from the early 1980s to include in a new painting.

After the awful earthquakes in Nepal, I have been going through my Nepal images and wondering what has become of the people in them.  I then took one of my favourite images of two sisters in a village on the Annapurna trail and made it into a 1 metre square wall hanging.  The image is split into nine sections and each one is made up of about 2000 smaller copies of the same image which gives the whole a sort of veiled effect.  Each of the nine sections is a darkroom silver print which has then been toned in sepia and selenium and the sections float mounted above a piece of black xpvc which is an excellent lightweight but strong backing.  This piece is now the focus for my Bucks Open Studios exhibition.  All income will go towards funds to build a new school in one of the many affected villages. 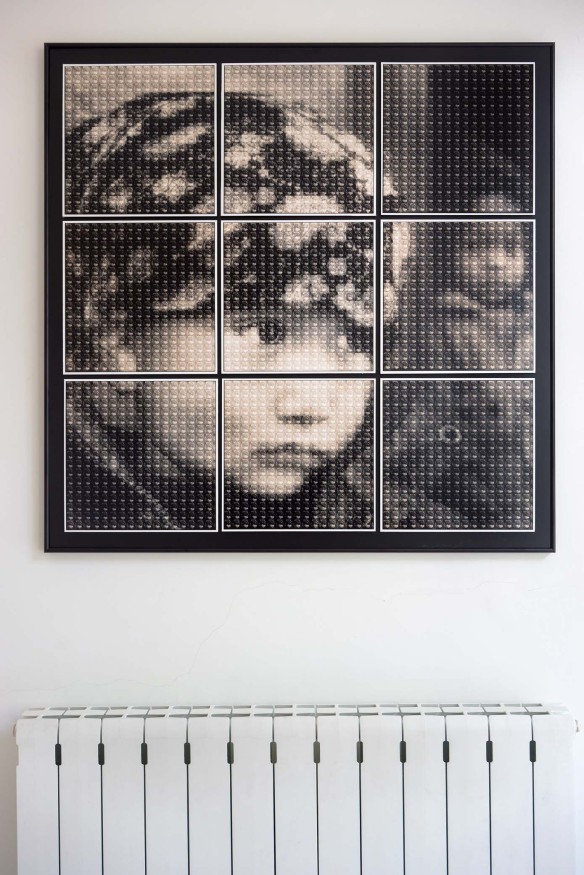 Having done this I have now completed a second larger wall hanging based on my ‘Angkor Thom’ image.  This one is constructed from around 2500 different images (some are repeated) from our journey through IndoChina last year.  Again each of the nine panels is a toned darkroom silver print. 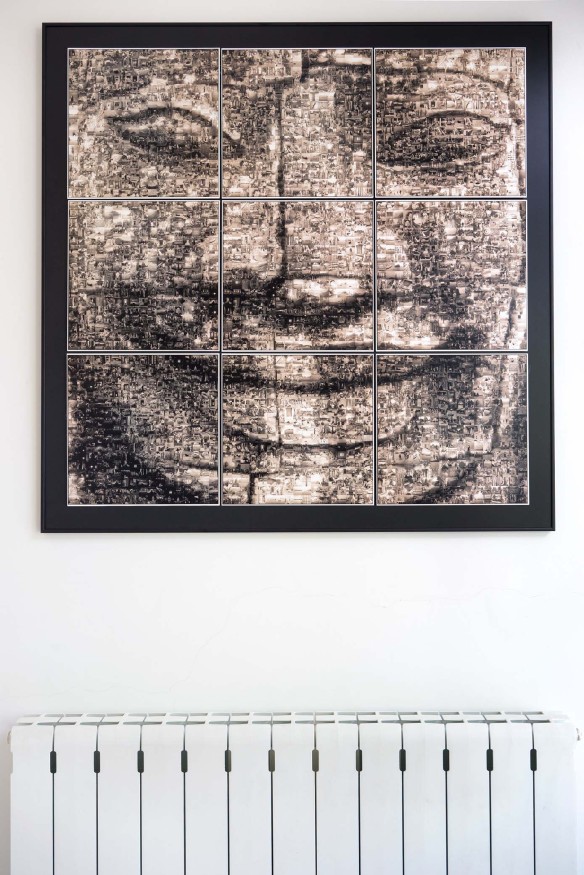